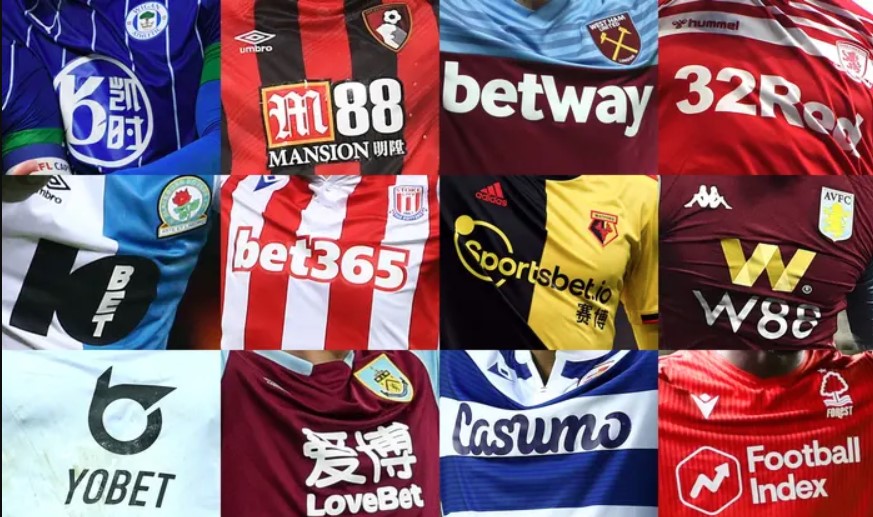 Football is big business, and that’s not just from ticket sales but bumper sponsorship deals too. Here are four of the most successful football clubs that are sponsored by online casinos today.

The dividing line between sportsbooks and online casinos has faded significantly, and many sites now cater to both types of wagering for the convenience of players. Unlike football, there’s no off-season for casino games, which can be played at a time to suit the individual bettor rather than according to a sporting schedule. Those with an eye for advantage, or who are looking at playing for the first time, can benefit from free spins and other no deposit bonuses which allow the chance to win real cash without having to risk any. Many of the top sites with sportsbooks also offer free bets which is a great way to make a football game just that little bit more entertaining.

Borussia Dortmund is one of the star teams of the Bundesliga, Germany’s foremost football league. Established back in 1909, over their long existence the team has built up an earnest rivalry with Schalke 04 and regularly battle against Bayern Munich in Der Klassiker (the German equivalent of the notoriously fierce matches between Barcelona and Real Madrid in La Liga). As the second richest club in Germany, and 12th team in the world (according to Deloitte’s), Borussia Dortmund has certainly proven financially successful, and they’ve enjoyed their share of silverware as well. The side has won the Bundesliga on eight occasions, three of which were in the 21st century (most recently back-to-back titles in 2010-11 and 2011-12). Galling as it may be, they’ve also been the bridesmaid rather than the bride on multiple occasions recently, coming in as the runner-up five times since 2012. However, that has contributed to numerous Champions League appearances. In 2012-13 they managed to come second in that competition, but the 1996-7 season saw them claim the most desired trophy in European football.

Naturally, this leading light of German soccer has a plethora of sponsors, including Bwin, which is not only an online casino but (fittingly) a sportsbook too. Virtual sports, live betting, and poker are all on the wagering menu from this outfit which sponsors Borussia Dortmund for mutual benefit.

Time was a few decades ago that Manchester City was very much in the shadow of their Red Devil rivals, but nowadays it’s the boys in sky blue who are the city’s dominant side. Even though Manchester City’s history goes back to the Victorian period (they were founded in 1892) their time of greatest achievement is the modern era. Between 2011 and 2021 the side won the English Premier League five times and were runners up thrice, making them the most successful English club in the last decade. Their success on the European stage has been rather more muted, with an agonizingly close second place in the Champions League of 2020-21 (and to rub salt in the wound, they lost to fellow English side Chelsea). However, they did win the Premier League title in the same season so it wasn’t all bad news.

It may seem that money can flow like honey in football, but even a colossally successful side like Manchester City need to balance the books and sponsors are critical. Among the many sponsors of the club is Marathonbet, an online casino and sports betting website that also offers live dealer games and e-Sports markets.

A titan of football in soccer-mad Italy, AC Milan has a heaving trophy cabinet thanks to its decades in Serie A. It’s eighteen UEFA and FIFA trophy tally is the most won by any club in Italy, and AC Milan has won the same number of domestic titles (putting it 3rd on the list behind Inter Milan and Juventus). The 1990s were an especially purple patch, when the team won half the Serie A titles of the decade, with another couple in 2003-4 and 2010-11. The side has also won the Champions League multiple times, including 2002-3 and 2006-7.

When it comes to sponsors, AC Milan has plenty of corporate interest. On the betting front, the club is associated with StarCasino.Sport, an online betting site attracted by the profound heritage and on-pitch success of this iconic Italian team.

When it comes to storied history, few teams can compete with the longstanding pillar of English football that is Tottenham Hotspur. Spurs came into being in 1882, and were the first 20th century side to scoop the double of FA Cup and League title in 1960-61. The next couple of years saw them defend the FA Cup and achieve another milestone, becoming the first English side to take the European Cup Winners’ Cup. In 1972 the first-ever UEFA Cup was held, and Spurs were the side that won it. While Spurs have never enjoyed the sheer dominance of some sides, they have enjoyed prolonged bouts of repeated success, winning silverware throughout the decades of the latter half of the 20th century. They also came very close to claiming the 2018-19 Champions League title, losing in the final to Liverpool which some bookies had predicted. Since then they’ve changed coaches, and are now led by Antonio Conte.

Success on pitch has come with lucrative sponsorship deals, including a trio of online betting sites. Betway is Spurs’ official betting partner for North America, with William Hill holding the role for Europe and Australia, and Fun88 likewise for Asia and Latin America.